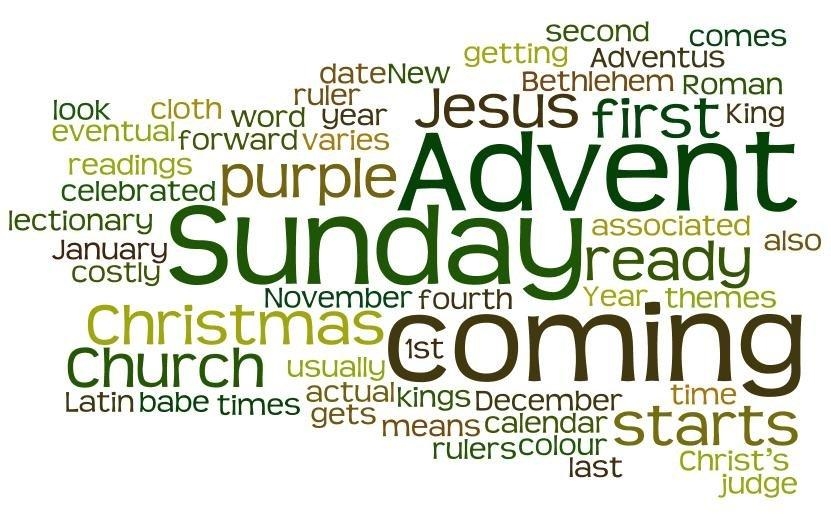 The calendar year starts on 1st January – but for the Church its New Year starts on Advent Sunday (the fourth Sunday before Christmas).The actual date varies but it is usually the last Sunday in November or the first Sunday in December.

Advent comes from the Latin word Adventus, which means coming, and it’s the time when the Church gets ready for the coming of Jesus, celebrated at Christmas. The readings in the lectionary look forward not only to Christ’s first coming as a babe in Bethlehem, but also to his eventual second coming as judge and ruler of all. The themes are:

In Roman times purple cloth was the most costly, and was associated with kings and rulers. And so the colour for Advent, the getting ready for King Jesus, is purple.

All too often, Advent gets lost in rehearsals for Christmas presentations, and the sense of anticipation and waiting disappears. The ideas in this section offer ways of recapturing Advent as a season in its own right - preparing ourselves to receive the gift of the Christ Child on Christmas morning.

Advent in 2 minutes is a fantastic introduction to Advent!

BRF have produced material for children on Hosea, Micah and Amos which together form an Advent series on Love, Hope and Justice. The downloads are available on the right.

Excellent resources from the Uniting Church in Australia, based round the Lectionary, for multi-age and households to use.

Re:Quest has lots of articles, games and Advent information: type Advent into the search box

Advent ideas from the Diocese of West Yorkshire and the Dales

An Intergenerational event for Advent

Song and responses for lighting the Advent Wreath Candles

Story books for Christmas and Advent

Advent material from the Church of England

An Intergenerational Advent Workshop (scroll down)

The Text This Week - Advent

The Liturgical Season of Advent

Gifts for the Christ Child

Start Advent with all ages together

Intergen Resources for Advent 2018 from the Uniting Church in Australia

Are you ready? The story of John the Baptist for early years

Great Expectations - a 4 part drama for Advent from ROOTS